I created this post 2 years ago with the intention of writing a series devoted to different procedures. But my woad crops failed and other stuff happened, as per usual, and here we are. So while waiting for black paint to arrive some time in the distant future; in between holiday house chores, I have a bit of green for you.

END_OF_DOCUMENT_TOKEN_TO_BE_REPLACED

I didn’t yet get up to that promised week of just plant dyeing every day and writing up a storm about it, but I yesterday did a bit of odds and ends for future projects. First I decided to use up the bucket of woad solution that I saved back when I last dyed in fall. I had some extra yellows, so I planned to throw them all in together.

The theory is, I think, that you just need to reheat to 50° C, apply hydrosulfite and Bob’s your uncle. PH was good. Blue froth – not so much. Perhaps that black coating on the bucket lid was all the dyestuff?! After all my preparations the dyebath still looked odd, a lot like another which I never used, of Japanese Indigo which I suspected was harvested too late. So this time I tested one skein just for science and got what I expected: FAIL. But at least this task is now off my list 😉 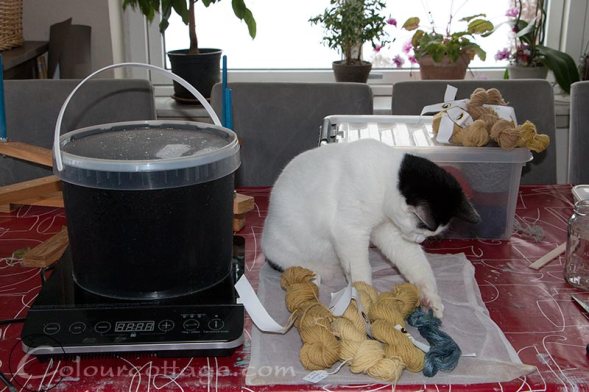 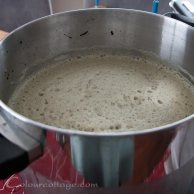 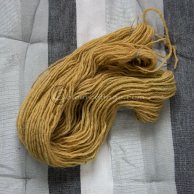 I can’t properly acid dye beyond the solutions I’d already made, since my scales are broken, and I use such tiny amounts of powder when I mix that spoon tips are too inaccurate. So I’ve run out of most colours after today! 😦

In fact afterwards I had a pot of leftovers with some other baths poured into as well, some kind of brown, I suspected it might even be nice (on the white spoon it looked just like red wine), but which yarn do I put in, as in, which type of project am I likely to use it for?! I don’t like to just pour it out…

I made a purple that I really ended up liking, so now I regret only making a small skein. For the intended tapestry project (yes, yes, I know I said I’d use the plant dyed yarns for that, and I will, I promise! But, you know… one idea breeds another and….) I don’t need a lot of the purple, if any, but perhaps I’d want to use it in another? Oh well. It was something with violet and a bit of black and a bit of rusty brown from the other pot, but did I also include green? (my goto breaker of purple to tone it down a bit) And if somebody now says “what do you need the scales for”, see the above mention of the huge amount of leftover dyebath. 😉 I also don’t know quite what made the gold colour, which I ALSO like, because that too was made from sloshing leftovers into my last bit of yellow. 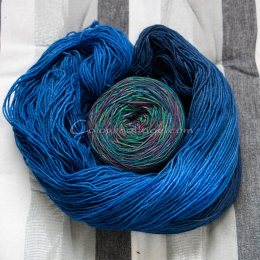 In the end I found a use for the leftovers, which did not yield red wine but rust. I stuck the end of 100 g top in there until it had enough, next bit in, next dye leftover etc. completely at random. I mean to spin it and weave it as a tapestry, shapes determining what happens with the colours. Or something. It’s cheviot and there’s no way it’s getting near my skin other than hands.

Perhaps not one of my brightest moments. The top ended up looking pretty ghastly, but I’m going to spin it anyway. Who knows, I might get a surprise? And then what happened as I got to the end of the rope and it had taken on enough colour? I was left with ANOTHER bath, this time dark green. So whatever, I added one of the small silk skeins I use for plant dyeing.

And now for some weekend. I wanted to weave now that I’m all warped, finally, but apparently I’ve been overdoing things says the body, headaches for two weeks now. I don’t think I ask it for very much, I’ve been indulging the “no exercise wish” for a while longer, but apparently “projects” are taxing the stress muscle even if they’re fun and relaxed. I don’t feel stressed or anxious, but I know it could be the next step, even though I think I’m doing pretty well with my attitude towards “busy.” I rarely go “OMG there’s so much I have to do”. So it’s probably “I have so many things I wanna do. Just one more…” 😉

Or possibly it’s not my busy-ness at all but my thoughts about “what if someone disturbs me or asks to see me in the middle of my project, not right now please I need to do this thing first. Just go away and come back next year.” And I know I’m blowing it out of proportion. Something to work on.

So I’m not feeling happy about this break as usual, a weekend of just sitting isn’t really my idea of a good time. Probably doing nothing will stress me even more, so I’ll have to pick one, slow project to fiddle with. Back to serial thinking…

Tonight I deserve a rest though, I wheelbarrowed a week’s worth of horse manure out to the back field to try to cure my shoulder tension. And vacuumed the bedroom. Possibly I’ll just spend the weekend doing the rest of the house very slowly and getting my desk ready for a fresh start Monday.

Mid November, and yes, there are still a few things out there to forage.

I trimmed some wild rose bushes that were reaching over the riding ring fence, so while I was at it I picked the fruits off. I got this idea from Rima (you have to scroll down a bit) that I wanted to try – didn’t pick all that many as it was a bit awkward cutting with my left hand, but enough to give it a go I hope. Scratchy work too without gloves, but I can’t feel what I’m doing if I wear them, the downside being that you feel rather too much when you don’t 😉 I also put some of them in a stew that evening because I’d forgotten to buy mushrooms, but frankly I got impatient with scooping the seeds out, so I’m unsure if they actually added to the taste. Will try with bigger ones next year if this turns out like it’s supposed to – I’m wondering if it won’t all just mold. I’ve done it with fruit, sugar and rum, but never just sugar.

I also picked a tiny batch of woad to get more colour onto the fleece I dyed a couple of weeks ago, it still works fine, if not as strong as in summer. Some of the locks were so pale they were almost grey, but now at least they’re more like faded jeans.

Got the reddest of the apples off the lawn, made G peel them and yes, managed to get my winter supply of apple sauce done (I like it on oatmeal instead of sugar – and I have a great recipe for marzipan/apple sauce buns too). Only had two vanilla pods, but it turned out fine. I put the jars in the oven afterwards, the canning procedure means it can last for years just in a cool cupboard. I don’t use pretty photogenic jars, I just recycle whatever we buy. My kitchen is far from pretty either, more like shabby 70’s homemade. But you can cook in it and I have a new drumcarder!

The kale is of course fine in the cold, I use it both in salads and warm, sometimes I make pesto. Hopefully the caterpillars are done nibbling their portion? New recipes are welcome if you have any favourites.

Dug up the last potatoes, well, G did, and while there are not a lot I think it was a fine harvest from 9 plants, and a good size too. 3-4 kg at least.

I’ve been pressing leaves to use in collages, they got squished a bit more than I planned, paper thin and brittle, but at least they are bone dry. I hope they regain some colour if I cover them in acrylic medium, much like varnishing rocks does.

And now I think I can safely say that we’re moving into winter soon… There’s blue on the temperature curve for next week! 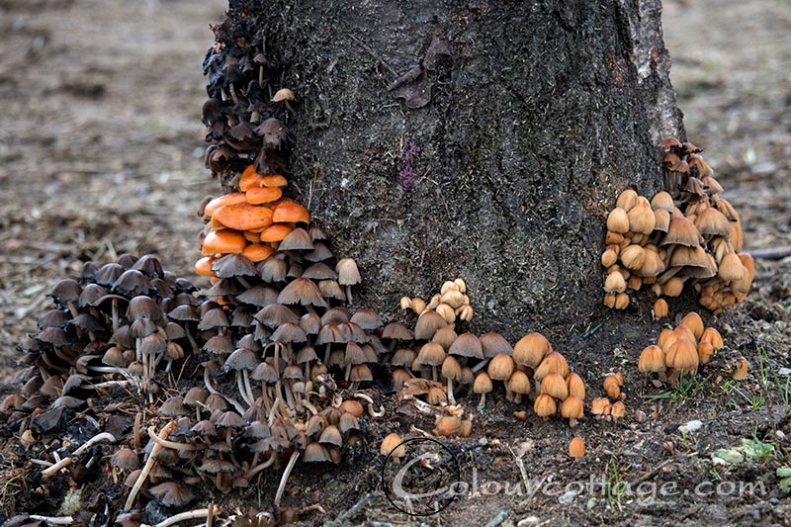 Eager to try drum carding my Dorset fleeces (with a bit of Suffolk mixed in, they had not been separated) I decided last weekend to make a final raid on the dye garden to make it more fun than just white (I do still have a bag of white from last year of what I think is Suffolk). I know I said I was done, but I got two more fleeces, didn’t I. Same sheep – this time I only kept the best bit, perhaps a third of what I was given rather than 2 thirds. I haven’t weighed it though.

And it turned out both the weld and the woad were still fine to use, green and fresh. I had dried some bundles of tansy hanging them from the stable ceiling – and left them there, so they are now covered in “dust” – mold spores. I decided to boil one bundle anyway and put some fleece in. Giving out colour just fine, but I’m chucking the other three bundles.

The last batch went in with some onion skins that were sitting on the kitchen counter anyway and a few cochineal sprinkles on one side, which oddly enough didn’t do much besides turn the water red.

I used rather a lot of fleece in the woad vat, so apart from the green that didn’t turn out too interesting. But I can always dye the yarn again, or, if we don’t have any frost, go look for more plants in a few weeks.

Earlier this year I handcarded the part of the fleeces that I had acid dyed, and it took me FOREVER. My test bat on the drum carder last week took no time at all, no effort, no tired hands – so I’m very optimistic I can get spinnable fiber relatively easy. I’ll first card each shade on its own to straighten it out a bit, then I may blend. 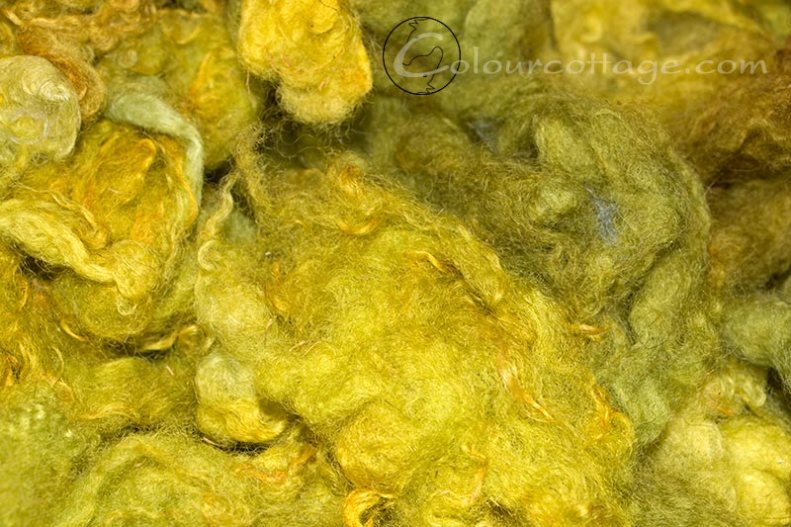 My first woad results this year. Next year I’ll focus more on these rather than doing many plants, I just hope it keeps spreading in my abandoned vegetable garden. I was glad to find that there’s plenty of colour in them even this late in the summer, old leaves with holes in them and all. I saved half my “potion” in what I hope is an airtight bucket for dyeing more later. I wanted the option to experiment more and besides, I ran out of Spectralite. 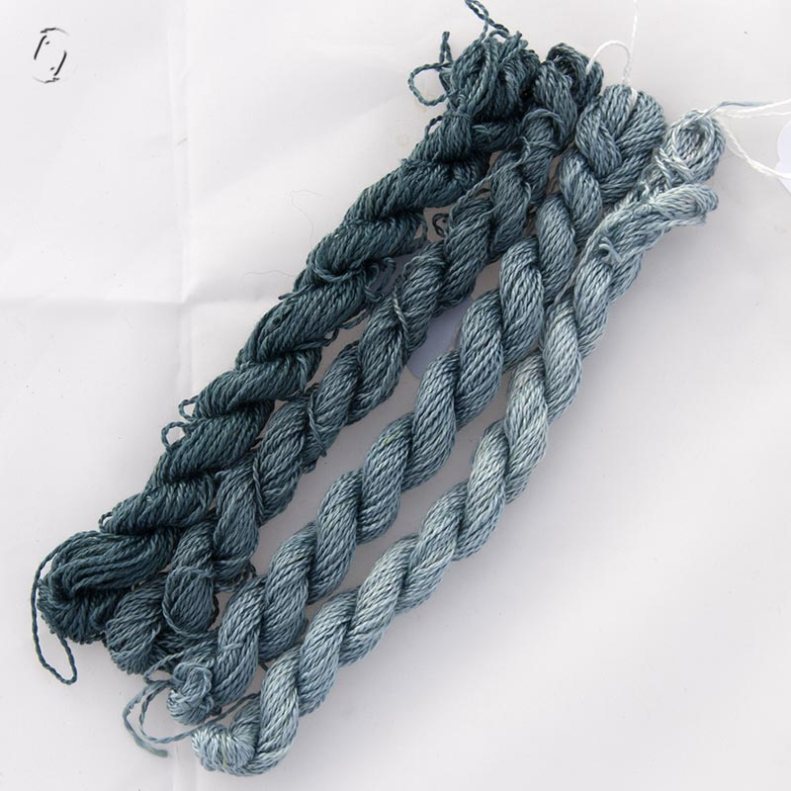