Normally they say that if a canvas won’t hang flat against the wall and wedges don’t solve the problem, restretch. If the frame itself is warped, get another.

So what do you do if you are “poor” and kept a large bundle of previously used bars in your barn for better times, and, when assembled anew, some of them warp?

Recently I tried the trick of weighting down the offending corners on a flat surface overnight. And it worked right until I was halfway done tacking on the canvas, whereas I’d hoped if I was quick about it, the canvas would keep the bars in line.

As you know the physical me really suffers after this kind of work, so I was more than annoyed obviously and decided on a little experiment. I haven’t seen anyone offer this solution in my internet searches, so now I will, because it can work. I’ve done it before with other woodsy things.

Instead of just messing with the floating corners I decided to warp the whole frame in the opposite direction. That way, when it springs back to its old shape, there’s a chance it will go to straight, not all the way back.

A deck of cards under each of the flat corners, then a wet rag plus weight on the floating diagonals. Now they were on the table and the previously flat corners were lifted. Leave for a couple of days, remove cards and rags, leave weights over night. Remove weights, leave on table another day. (oh the agony of not having my table for a whole day!) Alternatively lift three corners and only weigh down one if you feel there’s only one culprit.

Oh, and I didn’t remove the canvas either, tacked to the middle on all four sides. If I’d been a little more energetic I would have, but there you go, it’s not like I’m some world famous artist with obligations. Tell you what, if anybody buys this painting I’ll offer a good discount if it ever warps again. 😉

On another note, as far as I remember it’s always been my largest frames that have been prone to this, even when the bars were new some 25 years ago. Under the best of circumstances I would probably get the heavier type from about 70 cm and up! (these are 42×17 mm – 75×75 cm)

If any of the individual bars is bent or warped, I would throw it away. All my pieces lie flat when not assembled and only warped when combined into a frame. Slight twisting along the axis? 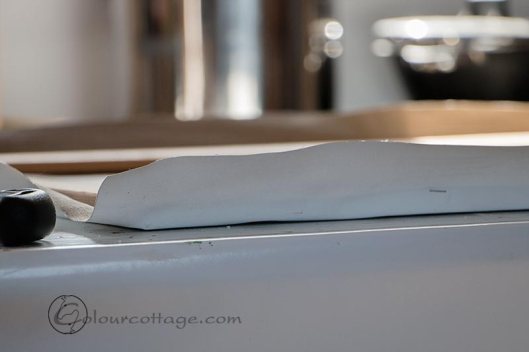 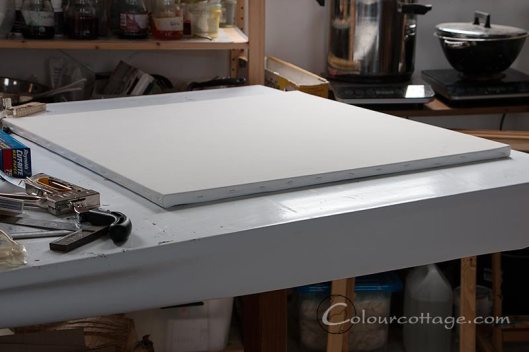 A week later left, a month right. Just the one corner, the others are flush:

Obviously I’m checking my old stretcher bars on assembly now, there’s been a few where just one was twisted ever so slightly along its length, resulting in a lifted corner no matter how I combined the pairs. This one I can use as a photo backdrop / neverending practice piece, so all’s not lost! I may try an even longer and more severe forced warp if I can find a free surface, but those rarely happen for more than 10 minutes at a time.

Sometimes you can fix a small twist like that by adding a frame. But look at this one which I just got back after being out on loan for a few years – the painting and framing itself is from 1993. I don’t know what happened, because it was fine the last time I saw it and the other paintings with it still are. I tried wedges, since they had fallen out of 3 corners, but it looks like it’s a goner.