After a frosty, beautiful, sunny weekend taste of the season to come, we’re now facing a rainy prenovember this week, temps around 5 C and winds to chill your bones. Weather for crafting, yeah? October has been really mild, but I guess it couldn’t last. 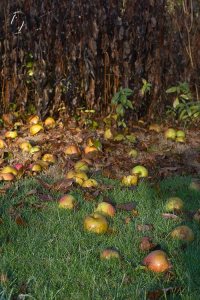 I haven’t been doing anything fibery really. I’ve been busy, and then I’ve been too tired. Next up is plying my “black” shetland, I managed to spin it a lot thinner than the last batch, so now I have to make more plies to match or I’ll never have that sweater.

I did manage to finish one wip though, the new collar on my scratchy sweater.

I unwrapped my last cotton plant print experiments – very disappointing, but more about it later since I did not take advantage of the sun to take pix. I think next year I’ll try to get some silk instead.

We’ve been remodelling the bedroom wardrobes this weekend, now all that remains is reORGANIZING stuff. I just love it when I can fill a few garbage bags with old useless stuff (and get more efficient space for fiber too). I have 5 new shelves instead of a double coat rack – the other 5 I had to let the tall guy have since I made him throw out the mint green shirt his mum once bought him. 😉 I’m determined to have a clutter and dust free bedroom without his piles of whatever just draped across every possible surface. Some training in addition to the shelves will probably be involved in this project, but hope springs eternal… Come summer it’ll be paint the walls and wardrobe doors as well as carpet begone and we’ll have at least one room that’s relatively spiffy and up to date. Ok, I won’t invite any interior design magazines, but it’ll do. My life must be really dull since I can get all excited about cleaning house!!! (oh that promised trip to IKEA for my paint “studio”, when!?)

And I still have outside stuff to do, small trees that need to be replanted, some baby lilacs need to be dug up, the stable is overdue to have the cobwebs removed and I need fresh gravel in front of the door instead of mud. It’s good to move your body they say. And so much more fun to do real stuff compared to mindless exercise! That said I got inspired by a tv show about the human as a running machine and got some Vibram Five-Fingers on sale. Not exactly the season for trying them out, but I do have issues with landing hard on my heel, instant knee pain when running and just feeling stiff and awkward in normal trainers. Could be just the thing? And they included free socks. 😀

Baby Arthur is now turning into a teenager and has been allowed trips outside to burn some of that energy. Oh, he sleeps so well after exploring the big wide world. He’s learned to use the cat flap, which was one of the requirements, since we have the occasional stray tom, and I want the little one to be able to escape to safety. Right now he’s feeling poorly after his 2nd vaccination, I do hope he perks up soon! I’m soo fed up with sick animals over the last few years.

You seem to need an additional brake, yeah?

No mom, we iz not fightin’!

I came across these nifty images from space, when I was zapping the interwebs, I’m thinking cool stuff could be made from some of these with Photoshop, as backgrounds for something?

But after I’m done – I will get back on my wooly track I’m sure. Moorit Shetland to be spun (thicker this time), fiber to be dyed.

2 thoughts on “Winter on the march”