Last year I had a bucket full of beautiful, golden dye, I’m not sure which plant I’d used (thinking celandine), but it was strong and sunny and the cotton pillowcases I dunked in there soon looked very cheerful as well. Then, hungering to see just how much dye they could take, I left the bucket a few more days. When I came back, it had all turned brown and there was mould starting to grow on top, it was slimy and smelly and  not sunny at all. 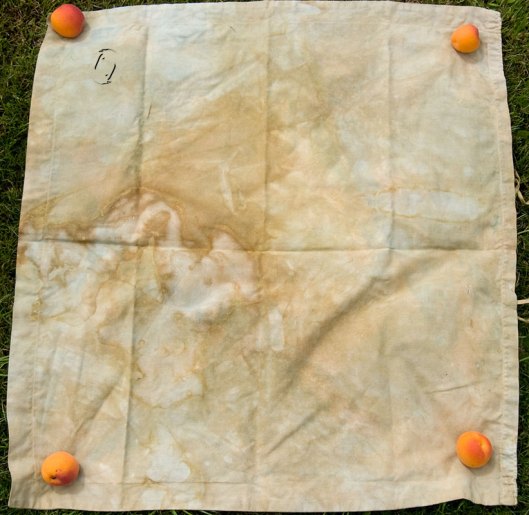 Sometimes you don’t have to leave it out for weeks, just sayin.

So I’ve been thinking, would it be cheating to add a slosh of preservative like what I use for jam? And would it even work in a container that’s not sealed?

So I decided to use a leaf dyeing experiment to try out the concept at least. One with jam preservative, one with vinegar. And well, I’m going to throw in a pot of Celandine too, they need some purging anyway. I can just make it before it gets cold I think.

There are pros an cons of course – since the rot can probably give you both surprises as well as a variety of colour that you wouldn’t normally get. But if that’s not what you want…

With the birch leaves I got exactly the same colour on the yarn, but the bucket without preservative got smelly and mouldy, the other lasted fine for a week in my greenhouse. So, some yellow dyes are ruined, some keep their colour.

Celandine results will be updated later!

I also added preservative to the jars of silk soaking up Dyer’s chamomile dye. No mould or funny smell at all even after weeks. They were in tightly closed mason jars.

So far it looks like the vinegar does as well as the preservative. About a month before both buckets of cloths got a bit mouldy on top, that was after I’d looked several times and taken the cloths out, not putting the lid back on properly.

5 thoughts on “On mould and rot”